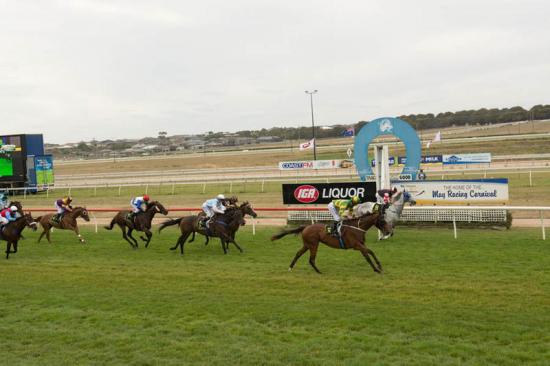 Genuine Artie Schiller galloper, Artie’s Shore was able to take out the IGA Koroit Cup on Sunday at Warrnambool.  After placing in both the Port Fairy and Woodford Cups in his lead up events, Artie warranted his favouritism by going on to win the 1700m race by almost a length.

Given a great ride by Damien Thornton, he jumped from barrier five and settled mid field early.  Approaching the 1400m mark he had to be checked off heels and didn’t seem like he was going to get clear running on the turn.  Damien then came wide into the better going in the straight which saw him run on well to hit the line strong.  He has now won over $135K for his connections.

The victory also provided the winning points for a trainer’s bonus of $2K for the stable.  Our team was able to hold off the dominant Darren Weir team by 1 point for winners and placegetters across the three local cups meetings Woodford, Port Fairy and Koroit.  This is a great achievement for our team and we will celebrate this win with our dedicated staff.

Congratulations to all of Artie’s Shores owners, it was great to see Artie in the winners stall and adding a country cup to his performances.