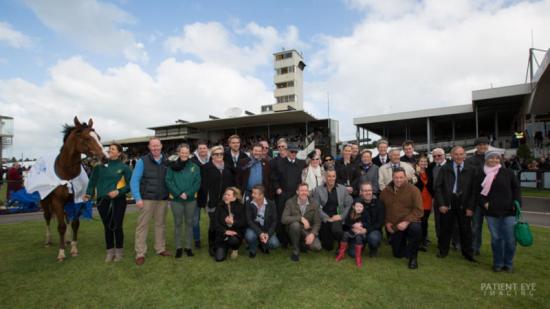 2015 will certainly be a Warrnambool May Carnival to remember for MW Racing. Equalling the training performance of 2009 we were able to train three winners, one each day of the carnival with Matthew being named the most successful local trainer of the carnival.  With the quality fields and presence of city trainers including racing’s leading lady Gai Waterhouse, it is the view of most trainers these days that winning one race over the three days is a good achievement, so to win three is something we are very proud of. The excitement and thrill is made all the more satisfying when we are able to celebrate the wins with the owners on course.

The first day of the carnival saw us left with one starter from four acceptors. Ticket to Toorak and Clairvaux would instead go around on day three and Shortspresso would be scratched looking for the wetter track at Ballarat on Sunday which he won!!

So it came back to Turnitaround representing the stable on day one, in race 10 the 1700m Open Handicap.  Rated well in behind the speed early, he was given a great ride by in form jockey Dean Yendall. The race was never in doubt when he peeled three wide on the turn into the better going and went on to win comfortably by 2 lengths.

Day two saw Iceyfiable run really well first up in the 1700m 3yo maiden race. She was able to finish third and will certainly be in the winners stall in the near future.  Our second starter for day two was Reigning Meteor in the 1000m showcase BM70 race. He went on to claim his second win from as many starts at the carnival and will now be set for the Wangoom Handicap in 2016.

Cup day was our busiest with six runners.  French Hussler and Like The Clappers both kicked off in race 2 the 1300m BM64. French Hussler ran well just meeting one better on the day to finish second (for the third year in a row) and Like The Clappers did not disappoint finishing 5th and running on strong. Clangstar’s Ace resuming for the stable ran third in the 1700m BM70, Ticket To Toorak finished 4th after leading early in 1100m BM78 and Clairvaux was able to finish 6th when given a throw at the stumps in the Warrnambool Cup.

After three consecutive attempts in the same race, Luckyimbarefoot was able to make it fourth time lucky for his connections, winning the 1400m open handicap. In another close finish Footy not only got his nose in front for the photo finish but also held on to the win in the stewards room, when a protest was lodged by the jockey of the horse that finished in second position. It was great for connections to finally be able to claim this race after he finished second in 2012, seventh in 2013 and had to settle for second again last year.

In summing up we had three wins, a second, two thirds and a fourth from 10 starters so overall we were very happy. Going forward we have horses with a fair bit of upside to them that can clearly handle the wet conditions.

It was great to see Darren Weir win the Warrnambool Cup with Tall Ship.  This is the second year in a row Darren has won the Cup with Akzar winning in 2014, both of these horses have been trained from Wangoom Lodge.  Darren now trains a team of 40 horses from our stables and this number will increase to 50 by the end of the month.  Darren has the use of our facilities and the recent results from both stables prove that the beach and country environment results in happy and sound horses.

All in all it was a great three days of racing, despite the weather. The track raced reasonably well across the three days and credit must go to course curator Daniel Lumsden and the Warrnambool Race Club for preparing and maintaining the condition of the track to withstand three days of racing in trying conditions.

Congratulations must also go to Dean Yendall for winning the Jockey’s Challenge for the second year running. Dean was able to knock up six winners for the carnival, which included two from our stable. Dean rides alot of runners for our stable throughout the year, right across the state, so it was great to see him recognised for his hard work at such a major country carnival.

I would also like to recognise the dedication to your horses by our staff. These results are certainly a team effort and credit must go to everyone at MW Racing for their hard work, this could not be achieved without them.

If you are interested in getting involved with the stable we have two yearlings with shares available. We have a filly by Testa Rossa from Alma’s Angel and another filly by Artie Schiller out of Firhill. Please visit the following link for more details www.matthewwilliams.com.au/horses-available. Both of these fillies will be headed towards the two year old races at next year’s carnival.

I hope that all of our owners enjoyed this year’s carnival. Anyone who would like to get involved next year should get in touch now as we begin the countdown to the first week of May in 2016.