Turnitaround Spins A Win At Flemington 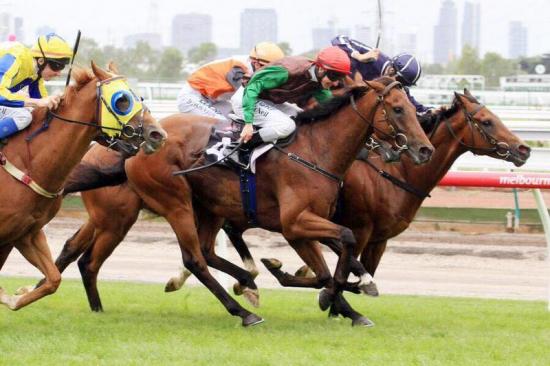 Matthew pulled the right rein running Turnitaround in the $80,000 Straight Draw Handicap at Flemington on Saturday, instead of the $40,000 Koroit Cup at Warrnambool yesterday.

Matthew missed Turnitaround’s victory as he was  on the Gold Coast for yearling sales but arrived back in Warrnambool yesterday afternoon.

'It’s the first time that Michael’s family's colours have won at Flemington' Matthew said. 'Michael and Greg raced Turnitaround’s mum Devon Dancer which we trained. There was great excitement after the win for everyone.'

Jockey Jye McNeil gave him a lovely run, proving too strong when challenged in the final strides. It was great to get another city win for Jye who rode his first ever city winner on Luckyi'mbarefoot who is also trained by Matthew.

'Turnitaround had been knocking on the door with minor placings in the Port Fairy and Woodford cups. He was entered for the Koroit Cup but we thought the restricted race for three and four-year-olds at Flemington was the better option.'

'The Flemington race was double the prizemoney of the Koroit Cup so it’s been a great result' he said.  He will now head to either Moonee Valley in 2 weeks or back to Flemington in 3 weeks were his record reads very well.

The win took Turnitaround’s stake earnings to just short of $150,000.  The lightly raced galloper may have his next start at Moonee Valley on January 24