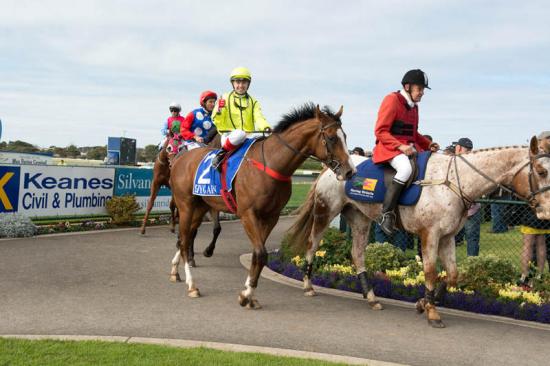 All in all the stable had a very successful carnival with a break through for a winner on Cup Day in the 2yo race with Reigning Meteor which was a big thrill. We started off on Tuesday with Old Bill and Republic Lad in the hurdle races. I was very pleased with Republic Lad, he looked the winner when he came over the last hurdle but the heavy ground took its toll a little bit and being his first start over hurdles he just got ran down to finish second. I thought his effort was very good and Brad McLean gave him every chance with a great ride.

In the 2yo Vobis Gold Strike, Already Leica was also second. She did a good job to lead most of the way and gave a kick at the top of the straight but was just ran down by one that was a bit stronger on the day. I was very pleased with her effort.

French Hussler was a close second in the 3yo 1400m race on Tuesday.  He looked to have the race won with 100m to go but Written Up came up on the inside and just proved too strong. It was a strong 3yo race and going forward with him I am confident he will certainly measure up to some nice races in town.

Thursday was probably our best day with the horses all running very well. Ticket to Toorak was a very gallant third in the BM78 1100m handicap.  Luckyi’mbarefoot who looked like he was going to pick up Glaneuse in the last race of the carnival finished second beaten a length. Glaneuse being a very good wet tracker just proved to be too strong.

In summing up we had a win, 4 seconds and a third from 11 runners so overall I was very happy. Going forward we have horses with a fair bit of upside to them that can clearly handle the wet conditions.

It was great to see Darren Weir win the Warrnambool Cup and take home the trainers bonus Mercedes-Benz. He trains a team of around 30 horses from our Wangoom stable using our facilities. Also it was good to see Patrick Payne who we do a bit of work for takeout the Grand Annual with Chaparro. It was a great race to watch and anyone who hasn’t been to the May Carnival make sure you put it on your bucket list.

It was a great three days of racing, despite the weather on the Tuesday. The track dried out and improved a little bit by Thursday. Credit must go to course curator Daniel Lumsden and the Warrnambool Race Club for preparing and maintaining the condition of the track to withstand three days of racing in trying conditions.

Congratualtions must also go to Dean Yendall on winning the Jockey’s Challenge. This was won by 1 point for his second place on Luckyi’mbarefoot in the last race of the carnival.  Dean rides alot of runners for our stable throughout the year, right across the state, so it was great to see him recognised for his hard work at such a big carnival.

Thank you to everyone who attended our breakfast at our on course stables on Cup Day. This is a great way to kick off the final day of the carnival. There a still a few shares left in the horses that we paraded so anyone who is interested should get in contact with Darren Dance at ATB for further details.

I hope all of our owners enjoyed this years carnival. Anyone who would like to get involved next year should get in touch as we begin the countdown to the first week of May in 2015.