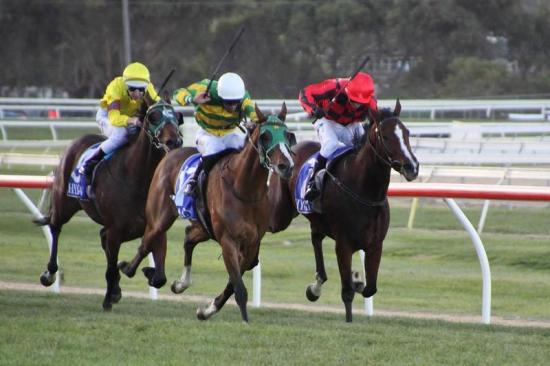 The stable had a very busy week last week at the Warrnambool Carnival with 21 runners in total over the 3 days. The star of our team was Clairvaux winning race 4 on Thursday the 2 year old 1200 metre race by 3.5 lengths. He was ridden well by Ben Melham. Well done to Clairvaux’s connections who were thrilled with a strong win. We also had first starter French Hussler in this race who finished in 2nd place. French Hussler was eligible for the $50,000 Inglis Race Series Bonus but missed out and was runner up to his stable mate who got into the right part of the track. Terrific effort by both our 2 year old boys. Other good performances for the carnival were Old Bill 2nd in the benchmark 78 2350 metre race, Shambles Street 2nd in the 3 year old 0-72 1400 metre race and High Class Lady 3rd in the 0-68 1000 metre race. We had our annual breakfast at our on course stable on Thursday morning which was great with around 80 people in attendance. It was a bit of a fresh morning but everyone enjoyed breakfast and there was a good vibe around the stable as we prepared for Cup day. Thanks to everyone who came along and made it a great morning. Also a big thank-you to our cooks we greatly appreciated your help. What a great carnival it was especially for the local trainers, jockeys and owners. It was great to see many of the local stable kicking home a few winners. Hopefully everyone enjoyed the 3 days and we now look forward to next year!