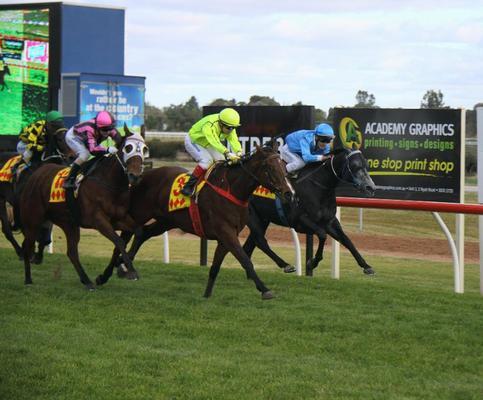 Uxorious was able to continue on his winning way when he won the 1200 metre Golden Topaz Sprint race at the three day Swan Hill Carnival. He looked in trouble at the 200 metres and it did not look like he was going to pick up the leader Beyond Pardon but to his credit he doug deep and was very gutsy to get himself in front and win by half a length and was drawing away from the field in the finish. He was ridden very well by Dean Yendall. All his winning connection were thrilled with his win and lets hope there will be many more wins like this to come. He will now head to the 1200 metre Monash Stakes at Caulfield on the 16th of July. After winning both the Wangoom Handicap at Warrnambool and the Golden Topaz this now puts Wazza in the lead for the Country Sprint Horse of the year which is a terrific effort. Italian Machine also ran very well and was unlucky not to win after missing the kick by several lengths and finishing a great third.