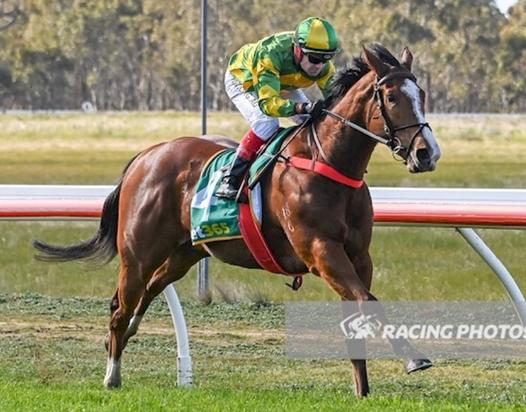 Three year old Shooting To Win gelding River Span (formally Yulong Riverside) has claimed his maiden victory at only his third race start, and the second run for our stable.  He was impressive in winning the 1100m 3yo maiden at Murtoa by three and a half lengths and seemed to appreciate the heavy 8 conditions.

Formally pre trained by us for the Price and Kent yard, Matthew always thought the horse had good ability but he pulled up shin sore after his debut last preparation.  He was then moved on by Yulong in an online auction and purchased by our stable.

Given a great front running ride by jockey Dean Yendall he jumped away fast from barrier 7 and pushed forward on the rail to take up the equal lead.  He then kicked clear on the turn and let down strongly in the straight for an easy win.

Congratulations to his connections, it was great to get a result with him in such convincing fashion.