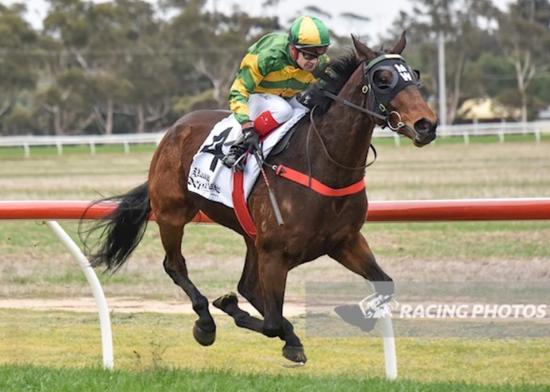 Three year old All American gelding Enbarr was able to break his maiden in good fashion today at Warracknabeal in race 4 over 1800m.  Coming off a disappointing last start effort at Donald, we were heading to the races today feeling somewhat hopeful rather than confident.  Any doubts were laid to rest with a smart ride by senior jockey Dean Yendall where a mid race move really did win the race.

Jumping away fairly from barrier 6 he was ridden aggressively to take up a forward position as instructed, but when those to his inside also had the same idea he ended up travelling third posted three wide with no cover.  Yendall elected to push on and took over the front running at about the mid race mark.  Enbarr was able to kick away from the field at the 400m mark and had them all off the bit and chasing, he let down beautifully in the straight to hit the line full of running to claim the race by 2.5 lengths.

Congratulations to his connections, we now hope he has the confidence to go on his winning way.