Another Flemington Win For Kuramae 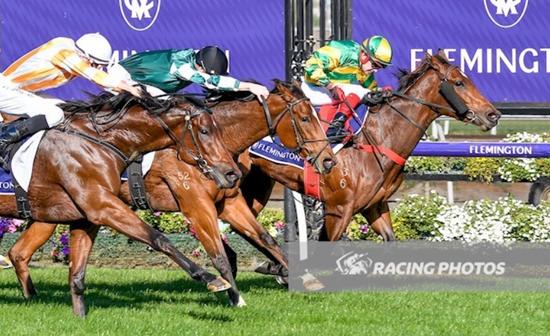 It's a nice problem to have when it seems your horses favourite track is Flemington on a Saturday!!!  Kuramae was able to bring up her third career victory from only ten starts and her second win at head quarters, claiming the 3yo 1400m handicap on Anzac Day.  After a below par last start performance we headed to the races more hopeful than confident which was also reflected by the punters in her large odds.

Ridden by Dean Yendall from barrier three she jumped ok but wasn't hustled and drifted back to fourth last, about seven lengths off the leader.  She relaxed well in the run before coming wide on the home turn into some clear running and hitting the lead around the 300m mark.  Taking up the lead this early meant she had some work to do but she was able to hold off the closers claiming the race by only 0.1L to the fast finishing second place getter Beehunter.

Congratulations to all of her connections, it seems we are in for another fun preparation with her.  The win also helps increase her value as a broodmare after racing with her stakes money now at almost $170K