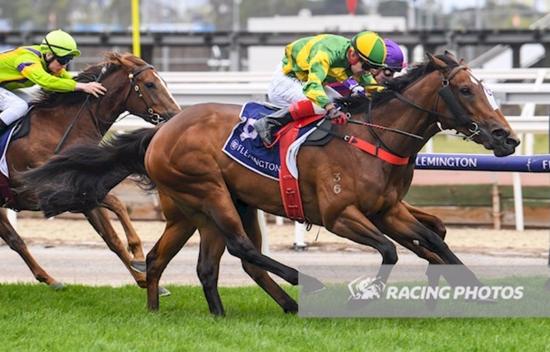 Progressive Foxwedge filly,  Kuramae gave the stable some early Christmas cheer by taking out the BM 70 three year old fillies 1400M race at Flemington on Saturday.  Purchased by Matthew at the Magic Millions Gold Coast weanling sale, she has shown the necessary improvement off her maiden win just two starts ago to give us the confidence she will continue to go through the grades.

Ridden by Dean Yendall she jumped ok from barrier four and settled mid field one off the fence about 4-5 lengths from the pace.  On straightening she was held up badly by a wall of horses, before Yendall checked off heels at around the 150m mark then burst through with an impressive turn of foot to claim the race.  She has now had 7 starts for 2 wins, 1 second and a third and collected almost $100K in stakes money.

Congratulations to all of her connections, what a thrill to get a winner at headquarters.  She will now head to a similar race at Caulfield on the 4th of January, let's hope she can bring in the new year with a bang.