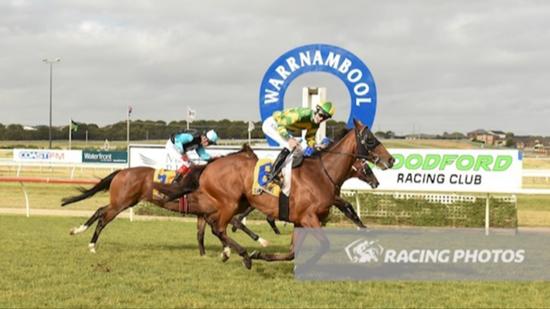 Seven year old Artie Schiller gelding, Artie's Shore was able to take out the 1700m Woodford Cup yesterday at his third attempt in the race.  Running third behind Profit Share in 2015 and fourth last year to Lucky Paddy, this year luck was on his side.

Given a 12 out of 10 ride by Damien Thornton he went back after jumping from the inside gate and plotted a path to the better part of the track out wider with the fence having been off.  He took a little bit more winding up than usual but really let down well in the straight to chase down the Darren Weir trained Howard Be Thy Name to take out the race by 1/2 length on the line.

Congratulations to his patient connections, it was great to see him back in the winners stall after some time of running well without winning.  We now head towards to Koroit Cup next Sunday hoping for a repeat performance.