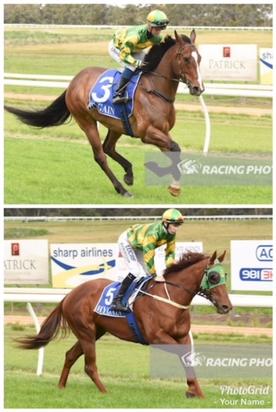 A stable double for the team yesterday at Hamilton, with an impressive 3 length maiden victory for Paremuus Boy and Ramensky having her second win in three starts for our stable taking out the last.

Liam Riordan took the ride on Paremuus Boy claiming 1.5kg in the 1400m maiden, a lightly raced son of Onemorenomore purchased by Matthew as a weanling.  He jumped well from barrier 6 and settled towards the rear before making his move around the field at the 650m and taking the lead at the 200m. While slightly green in the straight once he hit the lead, was too strong to the line.

Our second win was with Ramensky, a tough 4 year old mare by Wanted taking out the BM58 1400m race.  She was able to overcome the slightly awkward draw of barrier 8 when she jumped well and settled running 3rd.  Given a well rated ride by Damien Thornton she was just able to hold off the late chargers to win by a short half head.  Ramensky has now had 9 starts for 2 wins, 1 second and 1 third.

Congratulations to all connections, it was great to see both horses in the winners stall.