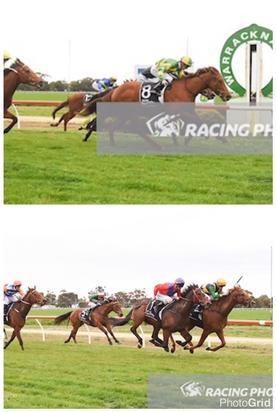 The stable was thrilled to bring home a double from Warracknabeal on Saturday. Two new stable acquisitions both having their first up runs were too strong for their rivals.

Ramensky well ridden by Daniel Moor won the 1000m maiden.After showing no early speed she settled mid field during the run before coming down the middle of the track and was too strong to the line.

Meanwhile Sacambaya claimed the BM64 1000m with apprentice Liam Riordan in the saddle.She jumped away well, took up the lead and fought on well to hold off the late charges.

Congratulations to all of the connections of both horses, it was fantastic to be able to reward these new owners so soon on after joining our stable.