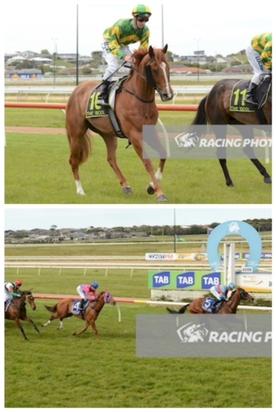 The stable continues its good form with a double at our home track on Thursday. Three year old Testa Rossa filly Alma’s Rossa, continued her good form coming off a last start second by taking out the 1200m 3yo maiden. Jumping from barrier one with Jack Hill in the saddle, she settled mid field on the fence before being held up on the turn.  She then came off the fence and let down well to hold off race favourite Deecember who finished second, just in front of our other stable runner Annie’s Our Hero who finished in third position.

Powerossa was able to win her second race on the trot and bring up the second half of our double. After her last start win at Warrnambool on Oaks day, she was strong to the line in taking out the BM 58 1300m.  Given a well rated ride by Daniel Moor, she went back from the wide gate and settled almost at the rear of the field. She began making her move on the turn, and got a bad squeeze at the 200m mark before laying her ears back and bursting through to hit the line full of running and claim the race by almost 2 lengths.

Congratulations to both sets of connections, who are bound to have some fun with both horses having plenty of upside going forward.