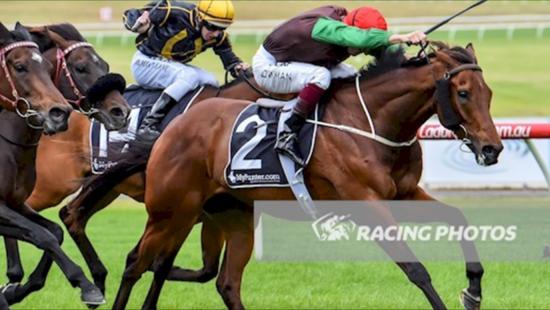 Stable star Turnitaround has earned a black type victory by taking out the 1800m group three $150,000 Eclipse Stakes at Sandown on Saturday.Given a 10/10 ride by Hugh Bowman, he was able to overcome the wide gate concern jumping when ridden on the speed and settled just outside the leader.He hit the lead at about the 200m mark and kept finding the line to go on and win by a long neck.

The six year old gelding by Hard Spun was able to hold off the challenge of the Weir pair, with the fast finishing High Church running second and his stable mate Lidari holding on to third.

This was the second group three success for the stable, with Uxorious winning the Spring Valley Stakes in Morphettville in 2011.

Congratulations to all of his connections, what a thrill to own such a consistent honest horse. The win takes his stats to 8 wins, 7 seconds and 6 thirds from 34 starts and his earnings to an impressive $536,625.