2016 Warrnambool May Carnival Wrap Up 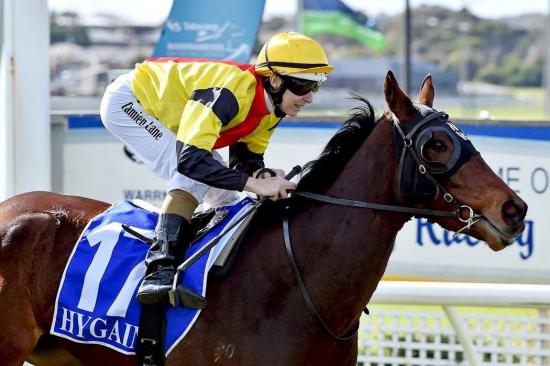 2016 will certainly be a Warrnambool May Carnival to remember for MW Racing. Setting a new personal best training performance we were able to train four winners, one on the first day of the carnival and then a very exciting treble on Cup Day.With the quality fields and presence of city trainers including racings leading lady, Gai Waterhouse and the all conquering Darren Weir, it is the view of many trainers these days that winning one race over the three days is a good achievement, so to win four is something we are very proud of. The excitement and thrill is made all the more satisfying when we are able to celebrate the wins with the owners on course.

A week out from the carnival had a few locals asking the question “will we get the rain”? And almost like clockwork the day before the carnival the rain came, and came and came !!! With almost one and a half inches in the 24 hours leading into day one and the track was promptly downgraded from a heavy 8 to a heavy 10 after race two on the card.

Our first starter to kick off the carnival was Gotta Cellarbrate in the 3200m maiden hurdle. Getting too far back in the run with a tempo that didn’t suit he was left chasing most of the way and was pulled up before the last fence. One of our home bred fillies Annie’s Our Hero ran well in the 1000m Vobis Gold Strike to finish just behind the placings in fifth position. Not able to get to the better part of the track she did a good job and will go on to win races.

Turnitaround was coming off a Flemington win only eight days earlier, but there was some doubt about his liking to a genuine heavy track.Given a text book Dean Yendall ride, he sat in behind the leaders before sneaking through on the inside and fanning the field until he reached the better going, he powered to the line to make it back to back City Of Warrnambool handicap wins by 4 ¼ lengths.

Shortspresso was first up in the 1100m BM 64 and while he normally appreciates the cut out of the ground he looks to be wanting more ground this time in coming home in 5th position.

Day two also saw four starters take their places. Iceyfiable was a little disappointing in 6th in the 1700m maiden, coming off some much better previous starts this preparation.Lady Selkirk was stepping up in class in the 1400m 3yo BM70 and put in a cracker of a run to finish second giving the winner all the favours in the run. She travelled four wide with no cover on the worst going through out and was named by racing.com’s good oil as the horse to follow from the carnival.

Reigning Meteor was good finishing fourth in the 1000m BM 70 and will now be stepped out in trip, but it was re assuring to see him hit the line after a disappointing prep last time in. Bel Seal rounded out day two being pulled up in the last after feeling his knees. He has been retired and will be re- homed to go on to a new career after racing.

Cup day was our busiest with nine runners. Milcah and Alma’s Rossa kicked off the day in the 2yo 1200m race and both finished un-placed and have headed to the spelling paddock and will return as better 3 year olds. French Hussler was disappointing in the 1300m BM64 and is becoming a very hard horse to follow with his inconsistent form. In the same race Powerossa was strong late finishing second, the gap eventually opened for her but the winner already had a break.Strategic Demand was scratched from the same race in search of a dryer track at Ballarat at the end of the week, which he also won !!!

Hollow Log surprised a few by taking out the first leg of our treble in the 2000m BM 64. Travelling at the tail of the field, he weaved his way through on the turn before being held up then eventually getting though in the straight.He fought on well when headed at the 50m mark he kicked again and found the line.

Race 5 the 1700m BM70 not only saw a race to race double for the stable but also a quinella. Race favourite Our Bottino finished second after taking up the running and doing all the work in the run, only to be headed and ran down by his stable mate, back marker Like The Clappers who stormed to the line claiming the race by 4 lengths.

The final event on the card, race 30 of 30 saw Artie’s Shore take line honours in the 1400m open handicap.Settling in the second half of the field he hit the lead 150m from home to a loud roar from a very happy group of mostly local owners. His stablemate Luckyimbarefoot finished 8th in the race after being forced wide and covering a fair bit of extra ground under the heavy weight.

In summing up we had four wins, three seconds and a fourth from 17 starters so overall we were very happy. Going forward we have horses that have a fair bit of up side to them, that can clearly handle the wet conditions.

It was great to see Darren Weir win the Warrnambool Cup with Master Of Arts. This is the third consecutive year that Darren has won the cup, with Akzar winning in 2014 and Tall Ship winning in 2015. All three of these horses have been trained from our stables at Wangoom Lodge. Darren now trains a team of 60 horses from our stables and is currently the leading trainer in Victoria. Darren has the use of our facilities with his own team of staff.The recent results from both stables proves that the beach and country environment result in happy and sound horses.

All in all it was a great three days of racing, despite the weather on the Tuesday. The track raced reasonably well across the three days and credit must go to course curator Daniel Lumsden and the Warrnambool Race Club for preparing and maintaining the condition of the track to withstand three days of racing in trying conditions.

Credit must go to the jockey’s of our winning horses Dean Yendall, Damien Lane, Mark Zahra and Damien Thornton. In particular Dean and Damien Thornton who ride alot of our horses all throughout the year, right across the state and make the effort to ride them in trials. It is great to see them being rewarded on race day.

I would also like to recognise the dedication to your horses by our staff. These results are certainly a team effort and credit must go to everyone at MW Racing for their hard work, this could not be achieved without them.

If you are interested in getting involved with the stable we currently have four yearlings with shares available. We have a colt by Bernardini and three fillies, a Testa Rossa, a Street Boss and a Manhattan Rain. Please visit the following link for more details http://matthewwilliams.com.au/horses-available All of these youngsters will be headed towards the two year old races at next year’s carnival.

Both Ultra and I would like to take this opportunity to thank our owners for your continued support of our stable, we really do appreciate it and we hope that you enjoyed this year’s carnival as much as we did.

Anyone who would like to get involved next year should get in touch now, as we begin the countdown to the first week in May in 2017.